The Itchyworms celebrate their era-defining legacy with the release of their new single “Eto Na (Ang Maliligayang Araw)” and the six-part series, Worms Upon A Time: An Itchyworms Podcast as part of the band’s continued 25th anniversary celebration.

The year-long musical treat follows the success of Waiting For The End To Start, which was pressed on vinyl and immediately sold out upon its release, and the launch of its animated music video, “The Life I Know,” which garnered critical acclaim across the board.

Returning to their brand of melodic pop-rock sensibilities with sharp hooks, bluesy guitar lines, and timeless lyrics, the multi-awarded Filipino band has dropped a call-and-response anthem about hurdling through the difficult times with a more hopeful mindset in life.

According to drummer and lead vocalist Jazz Nicolas, the song documents the feeling of being stuck in a challenging phase for a very long period, while hoping that everything will be fine. “You’re not quite there yet, but you feel that things are moving up a bit,” he emphasizes. “Kel and I call this the dark ages; it’s when all areas of your life seemed very bleak, and you always feel like there’s no way out. In this song, you’re not out yet, but you have a feeling that you will be.”

Even before the pandemic happened, The Itchyworms have always wanted to produce a jam song that would make for a strong album opener. Most of their newer tracks gravitate toward the uncertainty of the future or the long-simmering anxiety brought by the lockdown. “Eto Na (Ang Maliligayang Araw),” however, confronts the situation that we’re in with the healing power of a catchy, upbeat guitar-pop tune. It’s a perfect fit for what a 25th anniversary should be: a commitment to represent the band’s music and the history held within it.

When the lockdown slightly eased, the band regrouped into the legendary Big Baby Studios, where some of the alt-rock quartet’s most notable hits were born. “Big Baby was always home to The Itchyworms, especially to Jazz, because this was his father’s original studio in their ancestral home,” lead vocalist and multi-instrumentalist Jugs Jugueta shares in a statement. “I remember recording the first few demos of The Itchyworms there. I also remember Tito Sonny showing us all of his guitars, and Chino and I were just in awe. Now, it has come full circle: Jazz and Peavey and the worms continue Tito Sonny’s legacy, and the fact that we recorded our 25th Anniversary single there means so much to us.”

The Itchyworms reworked the early version of the track by adding lyrics that pay homage to their story together as a group, and even referenced some of their old songs in the material. Mixed and mastered by Jazz’s brother Peavy Nicolas, “Eto Na (Ang Maliligayang Araw)” finds the band experimenting with a Moog Little Phatty analog synth and a Yamaha Reface YC, bringing a unique twist on their classic sound. “It’s good that we finally got to go into the studio for this,” Nicolas shares the process behind the recording. “We all recorded our instruments live in the studio. and all four of us sang on it.” The Itchyworms’ guitarist Chino Singson adds, “Plus the outro or coda is totally unrelated to the tonal center of the song, but it adds a Beatles’ Magical Mystery Tour vibe.” 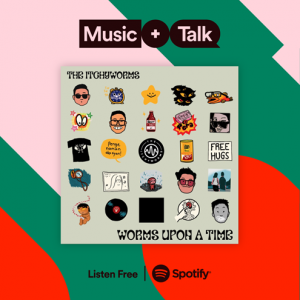 Worms Upon A Time: An Itchyworms Show

To celebrate the release of their 25th anniversary single, the band launched Worms Upon A Time: An Itchyworms Podcast, a six-part series exclusive to Spotify that explores the long-lasting appeal and impact of their albums in their 25 years of existence as a band. Produced by The Itchyworms and Sony Music Philippines, the show leverages Spotify’s latest format Music + Talk format, a new type of audio experience that brings together music tracks and spoken commentary, wrapped up into one immersive and interactive listening experience.

“I guess this is our version of the Beatles’ Anthology series,” Jugueta reveals. “Because that was the Beatles’ story as told by the Beatles. This show is our story, our history, our legacy as told by The Itchyworms ourselves. Look forward to stories that have never been shared before!”

The Itchyworms will have important guests who will be joining them on the show. Jugueta explains, “This project is very close to our hearts, and we would like to thank Sony Music PH for producing it and to Wincy Ong for directing it and to Peavey Nicolas for recording and mixing it.”

The Itchyworms are also set to release a mockumentary that chronicles their 25 years in the music industry and a music video of their self-titled track “Waiting For The End To Start,” whose visual narrative serves as an artistic take on the ‘dystopian future post-pandemic’ life in the Philippines.

The Itchyworms’ new single “Eto Na (Ang Maliligayang Araw)” is out now on all digital music platforms worldwide via Sony Music Philippines. Worms Upon A Time: An Itchyworms Pdocast is also available on Spotify.

Facebook Comments
NBT: NOBITA – The Search is Over (Lyric Video) Get a FREE CREDIT of $25  by using the code “PINOYRADIO” (EXTENDED until December 31, 2021 only)

Throwback Playlist: 10 of ANOTHER KIND